BUSINESS SEMINAR DEDICATED TO THE IMPORTATION OF FOOD PRODUCTS FROM ARMENIA INTO THE U.S. ORGANIZED BY THE CONSULATE GENERAL OF ARMENIA IN LOS ANGELES. 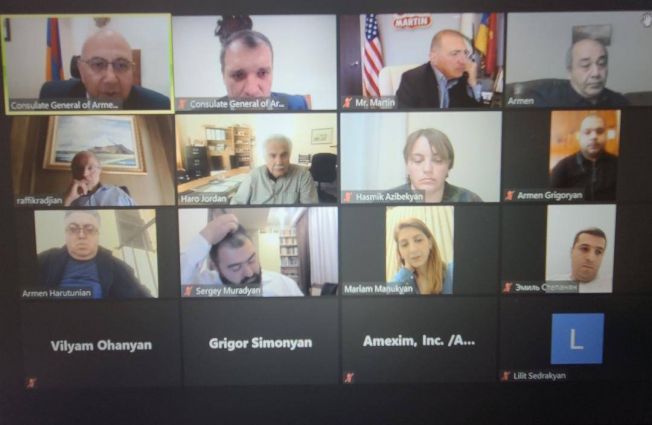 
GLENDALE - On February 24, a virtual business seminar dedicated to the importation of food products from Armenia into the United States was held. The seminar was organized by the Consulate General of Armenia in Los Angeles with the support of the local Armenian-American Business Council (AABC). This seminar was the second in a series of business seminars organized by the Consulate General of Armenia aimed at promoting the exportation of various goods from Armenia to the United States.
The business seminar was led by the Consul General of Armenia in Los Angeles Ambassador Armen Baibourtian. The virtual event was attended by representatives of various American companies importing made in Armenia products into the U.S. as well as by Varazdat Pahlavuni of the Consulate General, the President of the Armenian-American Business Council Armen Harutyunyan, member of the AABC Board of Trustees Armen Vardanyan, and representatives of specialized professional organizations from Armenia.
During the business seminar, among the discussed agenda items were the steps needed to increase the volume of food exports to the U.S. from Armenia, the ways of stimulating the consumption of Armenia made food products at large American retail chains, the impediments and restrictions in the exportation of Armenia made food products to the U.S., and increase in importation of organic products into the United States, etc. The participants also exchanged views and opinions on the implementation of effective cooperation mechanisms between the Armenian State and the exporters.
Ambassador Baibourtian underlined the importance of increasing the volume of overall Armenian products in the U.S. markets and the goal of accessing major American retail chains. In this context, the Consul General also noted the importance of establishing cooperation among the interested stakeholders, which generates their comparative advantage and enables achieving significant increase in business. The participants of the seminar stressed on the importance of focusing on quality of food products rather than just the quantity in order to take a respective market share in the high-quality goods market.
The participants also discussed the issue of compliance of goods produced in Armenia with the standards set by the U.S. Food and Drug Administration (FDA). The importance of compliance of Armenian importers and exporters with the Foreign Suppliers Verification Program of the U.S. FDA was emphasized. While summing up the business seminar, Ambassador Baibourtian thanked the participants for their valuable contribution and pledged support to those companies through consistent efforts and subsequent functions.
share:
MFA RA
official website
Dual citizenship
Electronic visa
Visa applications