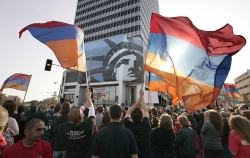 Small Armenian trading communities have existed outside Armenia for centuries. However most Armenians have scattered throughout the world as a direct consequence of the Genocide of 1915, constituting the Armenian Diaspora.

The first Armenian known to have moved to America was Martin the Armenian, who arrived in Jamestown, Virginia in 1618. Since his arrival Armenians have dispersed all throughout United States.

Glendale, California in particular is famous for its high concentration of Armenians.

In Hollywood, California a small portion is known as "Little Armenia", extending east and west from Wilton Avenue to Vermont Avenue and north and south from Hollywood Boulevard to Santa Monica Boulevard.

Cities of California with the largest Armenian communities are

The Armenian American community is the second largest in the world outside Armenia. The United States of America is now home to more than one million Armenians. Approximately half of this population reside in California.