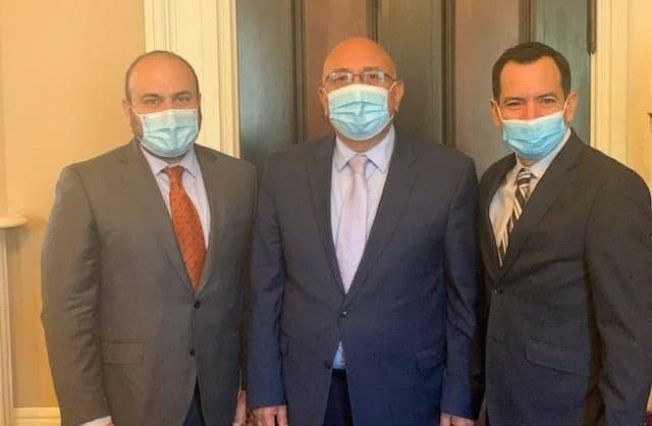 
SACRAMENTO - On May 27, Consul General of Armenia in Los Angeles Ambassador Armen Baibourtian visited Sacramento, the capital of California, and held a working meeting with Speaker Anthony Rendon of the California State Assembly. The meeting at the State Capitol was also attended by Adrin Nazarian, California State Assemblymember. The interlocutors discussed issues pertinent to the Armenia-California cooperation agenda aimed at enhancing the evolving partnership. Ambassador Baibourtian briefed the interlocutors about the post-war situation in Armenia and Artsakh. During the meeting, they exchanged views on the consequence of infiltration of Azerbaijani troops into the sovereign territory of Armenia, about the capture of six Armenian servicemen on the territory of Armenia, the murder of a soldier, as well as the inadmissibility of Azerbaijan's aggressive actions from the viewpoint of international law.
On the same day, California State Assemblymember Adrin Nazarian hosted a reception for legislators on behalf of the California Armenian Legislative Caucus in honor of Ambassador Armen Baibourtian. The event at Brasserie Capitale was attended by the California Senate Minority Leader Senator Scott Wilk and Senator María Elena Durazo, as well as by California Assemblymembers Suzette Martinez Valladares, Laura Friedman, and Luz Rivas. At the end of the in-depth discussion, the Consul General of Armenia expressed his gratitude to Assemblymember Adrin Nazarian for organizing the event and to all present legislators for their continuous support to Armenia and Artsakh.
share:
MFA RA
official website
Dual citizenship
Electronic visa
Visa applications